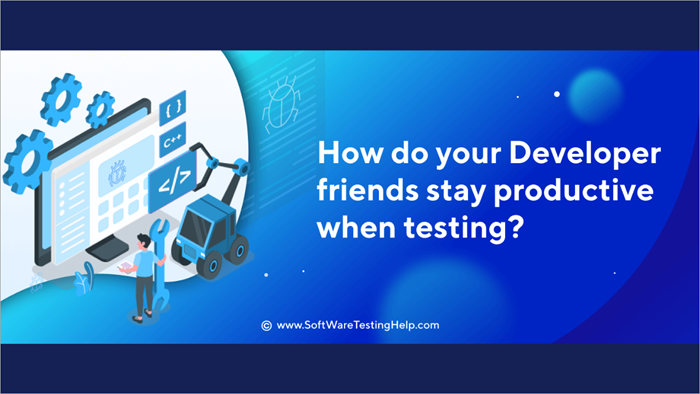 Gone are the days when traditional software development methods are keys and consumers are your final testers. Now is the era of breakneck product delivery speed, yet one glitch might cost you your company (just ask former global bitcoin trading company Mt. Gox, they would know).

To balance quality and profitability, testers and developers are united into one cohesive pipeline to continuously develop and test the application.

But for testers, is this practice as beneficial as it seems?

In this blog, we will see the current software testing practice from a QA team member’s perspective. It also includes a solution to a dire dilemma that the developers-QA codependency may entail, hence offering a peace-treaty resource for fellow QAs team and a transition for some developers along the way.

Rise Of An Old Strategy

Aside from unit tests, most of the testing portion falls into the responsibility of a QA. While some developers specialize in developing testing software, for the sake of clarity, we will focus on UI end-to-end testing that is traditionally carried out at the end of the software development life cycle by testers.

This test is important because it directly impacts the end-user experience, which is the primary audience of the product, hence the income source for the business.

You might notice that the term “traditionally” is used. That is because quality assurance is getting done sooner and by more personnel as multiple statistics confirm the downside of a bottleneck testing model.

Research from the Ponemon Institute discovered that, on average, early detection of the bug would cost around $80 to fix if detected in the early production pipeline. But if detected after they have moved into production, the fixing price is a staggering $7,600.

Another reason for this is the interference theory, that the act of forgetting results from different memories interfering with one another. It also proportionate with the similarity between those events. In the traditional method (V-model or Waterfall), the testing stage doesn’t start until developers finish coding.

Therefore, as developers move on to new projects, the testers are still detecting bugs from the old ones. When the testing results come out, it’s scientifically proven to be more challenging for developers to recall the original code structure to make appropriate changes that won’t affect the whole system.

Amid such concerns rise the shift-left approach: integrate testing early into the pipeline instead of segregating it in the final portion. The idea is that to save the cost, time, and human resources, later on, teams will conduct both static and dynamic testing as early as possible in the cycle, hence the term “shift-left”.

With the new strategy, the testing portion is sprinkled equally among testers and other stakeholders of each stage like PM, UX designers, developers, etc. As part of an Agile methodology, shift-left relieves time-consuming bottlenecks early on while there’s still time and scope for radical changes.

From a business perspective, this means release can be made faster with better quality, which is the key in this “Quality at Speed” era.

So what does Shift-left mean for the Software Development team? 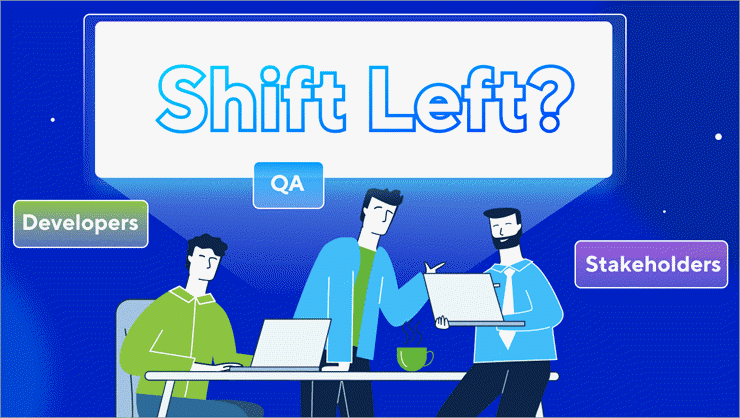 While the traditional model has QA teams waiting on the final product, shift-left involved testers early on, spotting bugs in requirements with clients and business analysts, or design sessions with developers and product managers.

Furthermore, testers have more time flexibility to map in-depth end-to-end testing plans and get themselves used to tools and new technologies if needed. Imagine how happy the clients would be knowing their app is delivered on par with the deadline, meet the requirement, yet achieve better testing coverage than those from your competitors’ software development teams.

Taking it into reality, it also means a tightly collaborative environment between testers and other stakeholders. Among the collaborative relationships, the most common is that of the developers and the QA teams.

According to the State of Frontend 2020 Report, more than 70% of frontend developers are responsible for testing either independently or together with QA specialists. It also gives the nod to the importance of end-to-end testing, with 40% of developers performing UI tests themselves. While this movement highlights the radical realization of shift-left’s benefits, one other problem arises.

In the 2019 Front-End Tooling Survey, almost 36% of developers currently do not use any tool to test their applications. It’s a well-known fact that manually testing hundreds of end-to-end testing is time and capital consuming.

Moreover, the additional work will affect the developer’s cognitive load because their expertise is on the wrong side of the scale. While testers are trained to “break” the software, developers build them. Therefore, as the number of new domain requirements (regression manual testing) increases, the cognitive capacity available for software development activity will decrease.

Instead of being a time-saver, shift-left is putting time constraints on the developers’ team, hence creating roadblocks for other teams depending on the product code in the pipeline.

The best solution is to deliver fast, break nothing

One of the major myths for Shift-left is that there are no tools to aid Shift-left. In reality, shift-left is aligned with Agile practices. Therefore, automation tools play an important role.

Understanding the demands, companies attempt to create many developer-friendly testing tools, aiding Shift-left’s implementation and enhancing collaboration productivity. The ideal tool for Shift-left is one that can be used across departments within a development environment, robust with a low learning curve.

Among the few tools that meet and exceed those requirements is Katalon Recorder, a lightweight record-and-playback web extension with the ability to generate automated tests. By not requiring any complex configuration, Katalon Recorder unlocks many testing possibilities for all members of a software development team, especially developers.

These possibilities are as follows:

Let us see how to start using Katalon Recorder.

To start using Katalon Recorder, first install the free extension either through Chrome or Firefox web store or on Katalon website. After a few simple clicks, when Katalon Recorder is on your web, simply open the extension and click on the Record button to start recording your actions on the web. 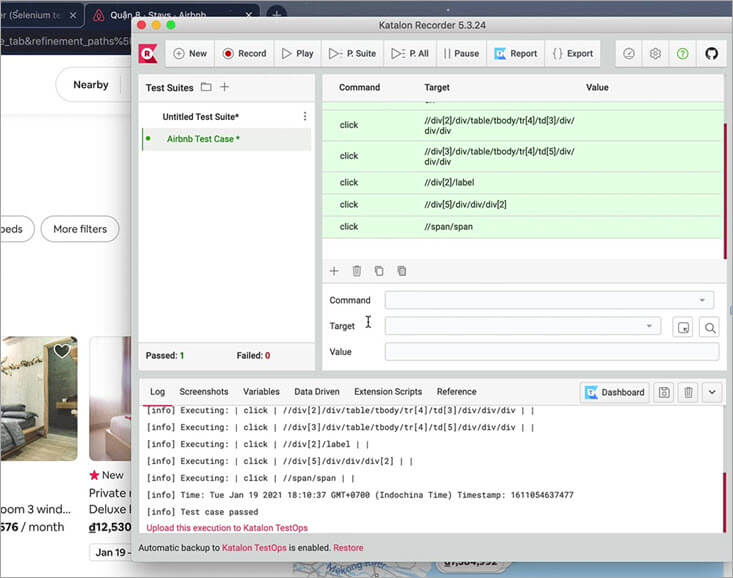 To use advanced analytics and data visualization capabilities, click on the Report button. It might require you to login into the Katalon portal. If you don’t have one, a free account on the Katalon website is just a few clicks away. These capabilities are made possible through the integration with Katalon TestOps – AI-backed analytics and test orchestration platform. 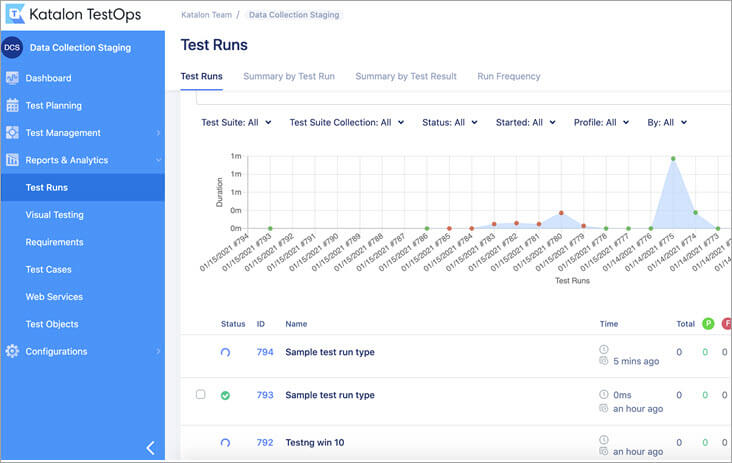 With the integration of Katalon Recorder and Katalon TestOps, all of your test results will appear in a centralized interface. This acts as a hub of real-time data and analysis from all the tests migrated from Katalon Recorder. To enhance collaboration between members, all charts and reports are shareable among teammates.

Both Katalon Recorder and Katalon TestOps are built by the Katalon team — a well-known software testing platform provider. We bet you’ve already heard the name Katalon Studio – one of the most widely used codeless testing tools in the market.

Here is a Quick Video tutorial for automating your browsers with Katalon Recorder:

While 100% defect-free is fictional, it’s possible to avoid disastrous bugs on any new release with a collaborative strategy of developing and testing.

We can be much more productive if we are mindful of the activity that we engage in every day, because only then will we consider how we can improve our procedure. Better yet, we can expand our professional horizons to see that there’s a tool out there that can help us immediately.

Among the tools in the market, Katalon Recorder is an excellent tool if you are looking to transition into software developers in a test that promises a seamless experience into automation testing, with all the power, and without the steep learning curve.

What Is Bitcoin, How Is It Different Than “Real” Money and How Can I Get Some?

Bitcoin: What Is It, and Is It Right for Your Business?

Bitcoin Is Here to Stay

Getting Started With Bitcoins

6 Benefits of Investing in Cryptocurrencies

How to Buy Bitcoin – Step One